Now the IRS is Stealing Your Money! The FairTax would eliminate the IRS.

If you own a small business, especially one that deals in some cash, watch out for civil forfeiture! The IRS is using civil forfeiture to steal money from innocent citizens and business owners. Civil forfeiture is the power to take money or other property from its owners if the government merely suspects that it was used in a criminal enterprise or was the result of criminal activity. The real injustice is that there is no due process when the IRS wants to seize your money. A glaring example of the abuse of this power was detailed by George Will in his opinion piece in the Washington Post on 4/30/14.

Most of us know that if we deposit more than $10,000 in cash, the bank has to report that transaction to the Federal government. But, you may not know that it is illegal to “structure deposits” to avoid that reporting. These laws were designed to catch money launderers. If you or your business regularly deposit cash in amounts under $10,000, the IRS can use those deposits as evidence of possible illegal activity and then seize the money in the bank account.

George Will told his readers about Terry and Sandy, a father and daughter who ran a small grocery store in Michigan. Naturally, they received cash in the course of their business. They would deposit this cash before the amount reached $10,000 because their insurance company would not cover cash losses in excess of $10,000 and they did not want to tempt potential thieves by having a lot of cash on hand.  Even though the IRS had cleared Terry and Sandy of any banking violations in 2012, in January of 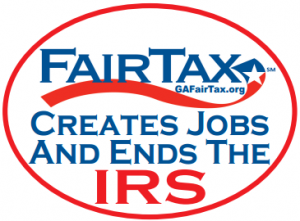 2013 the IRS got a secret warrant and confiscated all of the money in their bank account – over $35,000. They were notified by the IRS after the money had been taken. Terry and Sandy eventually got their money back through the intervention of the Institute for Justice, a non-profit libertarian public-interest law firm.

What makes this situation so corrupt is that the IRS gets to keep the money it seizes in civil forfeiture. That practice gives the IRS strong incentive to apply civil forfeiture to any business without reasonable suspicion of wrongdoing. The business owners are considered guilty until they can prove themselves innocent!

Do you think civil forfeiture is rare? Think again. It happened to a gas station in the same town at nearly the same time that it happened to the grocery store. It’s happening routinely all around the country. The Institute for Justice has filed a countersuit to prevent the IRS from continuing this pattern of theft.

The FairTax would eliminate the IRS. It would not be around to harass honest businesses. This abuse by the IRS is just one more reason we need the FairTax!