What do GFFT Volunteers Do on Weekends? (Part 2) 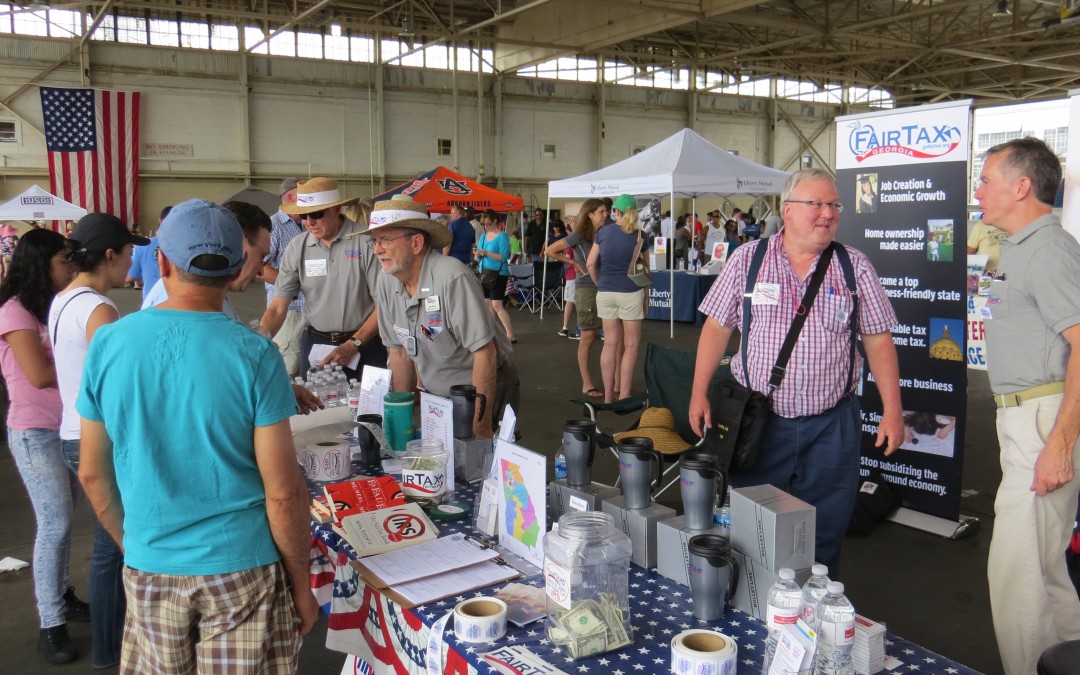 In Part 1, we discussed GFFTs participation in the GOP Convention and the outstanding work done by our volunteers.  Our volunteers also worked on two other events in May: the Walton County Barbecue and the Good Neighbor Day and Air Show at PDK Airport.

The Walton County GOP Barbecue, held at the Nunnally Farm in Monroe on May 26th, was our next event. Coordinator Diane Earnest recalls: this well-attended function gave us exposure to many of the state leaders such as Lt. Governor Casey Cagle, Secretary of State Brian Kemp, Attorney General Sam Olens, and Public Service Commissioner Tim Echols. Senator Johnny Isakson and Congressman Jody Hice were in attendance as well. The special guest for the evening was possible Presidential candidate John Kasich.

Walton County is a very strong FairTax county. I was told you couldn’t live in Walton County unless you support the FairTax.

There was more press than usual. Fox News was there along with CNN and Jim Galloway of the AJC thanks to the appearance of John Kaisich.

Mother Nature was not our friend; the heavens opened and it poured! No worries. There was plenty of room in the barn. Didn’t dampen the spirits of our FairTaxers though.

Thanks to our volunteers for the evening, Lisa Chambers, Dudney Harris, Barbara Fry, and Pat Durham. I’m always appreciative of help at the events. Even though we were among friends it’s important to have a presence at these events. 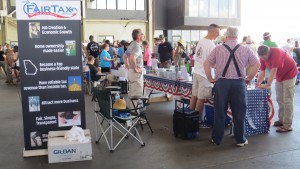 Our third event was May 30th, the Good Neighbor Day and Air Show at DeKalb Peachtree Airport in DeKalb County, with Chuck Norton coordinating activities for eight FairTaxers. Chuck’s recollection of the day has some perceptive insights:

Being inside the hangar at PDK airport was great. It meant we did not need our booth canopy. The hangar protected us from the sun (and rain, had there been any).

My impression was that most people who talked to us were already aware of and sold on the FairTax plan, but perhaps they never had an outlet to express that interest/support. Those people were quite eager to sign our contact form. For the rest, I think the push cards and website address will help them become better informed. There was an added bonus: we booth volunteers learned more about the FairTax from talking among each other.

The PDK event came on the heels of Memorial Day. While watching the war birds fly, the PA system played some kind of fallen soldier music. It was a bit sad. It made me think of all of the fallen heroes who gave their lives so that those who survived might gain liberty. And while I was contemplating that, a woman turned to me and asked, “Do the younger people understand the importance of this?” Wow, what a question. I thought for a moment and said, “I don’t know,” which is a sad statement. In parallel with that thought I kept in mind that anyone less than 102 years old (which is practically everyone) has never lived their lives free of the institution of income taxation. That fact means none of us have ever known the liberty enjoyed by our forefathers. How did that happen? And so I ask myself, do the younger people understand the importance of this? While I am hesitant to equate Memorial Day to the liberty we seek through the FairTax plan, I am reminded that Patrick Henry famously said, “Give me liberty or give me death.” So for me, Memorial Day is also FairTax Day. I hope someday that July 4 (Independence Day) may also become my new FairTax Day. It is about time for America to rediscover the liberty it once enjoyed.

Please add your thanks to Chuck for setting up a successful event with minimal lead time, ably assisted by these volunteers: Philip Duffey, Diane Earnest, Dorothy Garrett, Jack Shulin, Bob D, and Jon Colcord. Actually, Chuck said it very well for all of us in his post-event note to the team:

I want to thank each of you for showing up, being flexible to cover others for short breaks, for relabeling the water bottles, and for interfacing with the potential supporters. For my part, just getting FairTax visibility in front of the public is a very important achievement. My hat is off to you all.

Staffing a FairTax booth at an event is a lot of work. Even more important, it’s a lot of fun. It can be a great way to meet fellow FairTax advocates, learn more about the FairTax, and do something meaningful and satisfying for our country. The next time you receive an email from Georgians for Fair Taxation, asking for volunteers to work at an event near you, JUST DO IT!