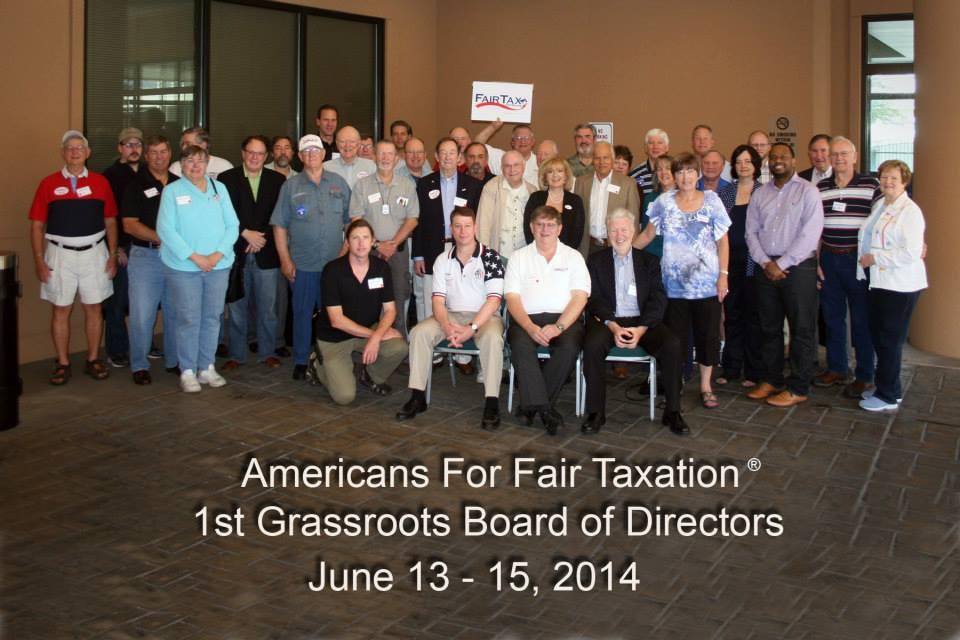 Announcement — AFFT Changing of the Guard

Georgians for Fair Taxation (GFFT) leaders emerged as key players at a recent meeting hosted by Americans for Fair Taxation (AFFT).  AFFT is the national organization formed to be the driving force behind the effort to pass the FairTax into law.  Headquartered in Houston, TX, it had been managed by FairTax co-founder, Leo Linbeck, Jr.  FairTaxers around the country were stunned when Linbeck died suddenly in June 2013.

Linbeck had held the reins of AFFT since its inception.  Because he had been such a force in promoting the FairTax, supporters across the country recognized the need to fill the void his passing left behind.

Local FairTax groups sprung up shortly after the FairTax was conceived.  Georgians for Fair Taxation (GFFT) was among the first to come together and continues to be the largest grassroots FairTax organization in the country with over 50,000 supporters.  These grassroots organizations have operated very independently from one another.  At the same time, AFFT continued to push its efforts at the national level without much coordination among any of these groups.

Linbeck’s death prompted FairTax leaders to examine the relationships between AFFT and all the local groups of FairTaxers.  The goal was to make the FairTax movement more powerful and effective in Washington.  With that goal in mind, FairTax leaders around the country negotiated for several months with the AFFT Board to transfer AFFT to a group of volunteers from the local FairTax groups.  The AFFT Board voted recently to make this transfer effective June 14, 2014.

FairTax delegates from across the country met in Houston over the weekend of June 13-15 to accept the transfer of official legal authority for AFFT’s governance, create a new Board of Directors comprised of volunteers leaders from around the nation, and begin the process of organizing AFFT so that is can move forward effectively.  The new board consists of 32 delegates from states which met certain criteria for FairTax grassroots development.  Georgia is one of three states with three delegates each; six states have two delegates each, and the remaining 11 states have one delegate each.  An Executive Committee of five members was elected to represent the entire board during periods when the entire board is unavailable.  A chairman, 3 vice presidents, a secretary and a treasurer were also elected.

The Executive Committee consists of the following individuals:

The following individuals are the elected officers:

Nine working committees were established and chairs selected for each:

This structure is a new beginning for our movement.  These committees will need to be fleshed out and to get to work.  We believe that this structure will facilitate communication between our individual supporters and the organization’s leadership.  This weekend we made and excellent start, but there is a tremendous amount of work which needs to be done.

With more grassroots involvement in the organization’s management and coordination of activities, FairTax supporters around the nation will have greater opportunities to pave our road to success.  You, as a volunteer, possess a huge reservoir of energy, skills, and resources.  The opportunity lies before us to apply them toward a cause whose importance cannot be overstated.  It will shape the future of America for years to come.  Let’s make it a bright one for our children and grandchildren.

Our grassroots support is the lifeblood of the FairTax.  As we move forward, we hope that you will re-commit to our cause.  You’ll hear more from us as things take shape.  In the meantime, we welcome your ideas, your support and your participation in our activities.  Become actively engaged in our efforts, make a financial contribution, and look for opportunities to participate.  Passage of the FairTax depends on you to make it happen.  Go to gafairtax.org for more information, and look for our email updates to find out how you can help.

Delegates, Georgians for Fair Taxation, and

This email was sent to tom.brown@gfft.onmicrosoft.com by Admin@GFFTHome.org
Georgians For Fair Taxation | 3106 Hathaway Court | Atlanta | GA | 30341