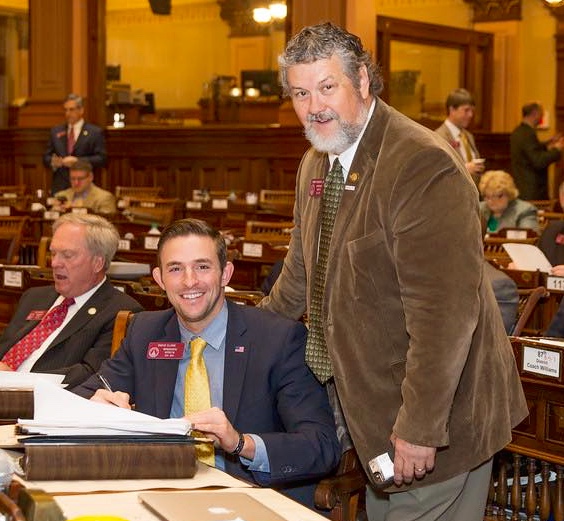 Twenty years from now, your grandchildren may ask you why Georgians celebrate March 11th. It’s not the first day of Major League Baseball Spring Training; that starts in February. It’s not the first day of Spring; that’s not until March 20th. And St. Patrick’s Day is always on March 17th. No, we celebrate March 11th because that’s the date that Georgia State Representative Emory Dunahoo officially introduced the Georgia FairTax® Act of 2016 in the General Assembly. That’s the date that Georgia took its first giant step toward real reform of our tax code.

HB 1141, the Georgia FairTax Act of 2016, is the culmination of over two years of hard work on the part of a core group of dedicated FairTax advocates. A handful of volunteers had the vision and courage to change the mission of Georgians for Fair Taxation from our original focus on the national bill (HR-25/S-155) to the more achievable goal of replacing Georgia’s state income tax and state sales tax with a pure FairTax modeled on the national bill. It’s the result of two years of dedicated, diligent effort by a small group of dauntless, dogged, determined volunteers, advocates who believe so strongly in a state bill for Georgia that they have devoted their time, energy, intellect, and treasure to bring it from a great idea to reality.

How did an idea become a bill? Let’s start with the great news, which we first announced in a special email on January 26th: WE HAVE A GEORGIA FairTax BILL. Having a finished bill in our hands was just the next stop along the rugged path from idea to decision, decision to planning, planning to regrouping, regrouping to execution, and finally to THE BILL. It’s one more step, and it’s a big one, but major challenges still lie ahead. While we have a core group of smart, very knowledgeable volunteers, none of us are experts on tax legislation, and we’re all neophytes in the inner workings of the state legislative process. When Santa delivered the bill, a few days after Christmas, we knew we weren’t ready to “drop” it into the hopper just yet. We took a collective deep breath and pushed on…

…to the good news, part one. Several members of our core group studied the bill and determined that it looked like exactly what we wanted, but we needed confirmation from trusted advisors with more expertise and more experience on getting legislation through the General Assembly. In addition to two local experts, one a university professor and the other head of the Georgia Public Policy Foundation, we engaged Karen Walby, PhD, a respected economist who also works with Americans for Fair Taxation on the national bill. She confirmed that the Georgia bill written by one of the co-authors of the Fair Tax Act accurately reflects the tax base on which Beacon Hill Institute based its scoring. So we kept on keepin’ on, to…

…good news, part two: Expecting positive reports from our outside experts, COO Tom Brown, Board Member Phil Hinson, outgoing Chairman/CEO Bill Fogarty, and State Director Jim Duffie, with input from additional members of the core team, narrowed the list of potential sponsors in both the House and Senate and held follow up meetings with the top choices. Those meetings solidified our choice of House District 30 Representative Emory Dunahoo, a Gainesville farmer and small business owner who is in his third two-year term. Dunahoo has long been a proponent of the FairTax at the national level, and he ran for the Georgia House at the urging of friends who told him that he should stop just talking about the FairTax and do something. He enthusiastically agreed to sponsor the Georgia Fair Tax Act of 2016 and told us on Advocacy Day (February 4th) that he had already received several commitments from like-minded colleagues to co-sponsor the bill. He also told us that we could let his curious legislative colleagues know that he is our sponsor.

On Advocacy Day, Rep. Dunahoo even took time for a video interview with one of our youngest volunteers, who just happens to be his constituent, and you can watch it here . Watch our Facebook page, Georgians for Fair Taxation, for video updates and more.

Finally, the news. Remember when you learned to ride a bike or roller skate, and stumbled or fell a time or two? GFFT faces the same challenge as we learn to navigate the route from producing a bill and finding the right sponsor to getting that bill introduced. We learned on February 9th that the deadline to introduce all tax bills, which must go through the House Ways and Means Committee after the Legislative Counsel’s review, was February 29th, Crossover Day.

Unanticipated? Yes, but remember we’re not professional lobbyists, and we’re learning by doing. We knew, even before we received the scoring from Beacon Hill Institute in late August and the actual bill from David Burton a few days after Christmas, that the Georgia Fair Tax Act of 2016 was unlikely to be voted on and enacted during this year’s session of the General Assembly. We’re taking lemons and making a big, frosty pitcher of lemonade.

Now we face another set of challenges to reach our goal – passage of HB1141:
• Continue to build broad statewide support for the bill. (That means everyone reading this article plus your friends and relatives).
• Recruit hundreds more activists and organize rapid response teams.
• Build membership in our Facebook Phone Tree groups.
• Raise the money we’ll need to educate Georgia voters across the state and to promote the bill.
• Meet with many more legislators in the House and Senate.
• Build interest in print, broadcast, and on-line media.
• Speak to local groups.
• Create presentations and more videos about the state bill.

You get the idea. Are you ready to help us make a state FairTax a reality for Georgians in 2017? Click here, and roll up your sleeves. [insert link to Volunteer page]