Announcement for Georgians for Fair Taxation 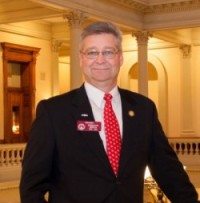 On Tuesday, August 26th, Representative Tom Kirby hosted the kickoff campaign for his reelection to the Georgia House of Representatives in the general election this November. GOP candidates from across the state attended the event, including Governor Nathan Deal and 10th Congressional District nominee Jody Hice, a FairTax supporter.

Kirby has represented the 114th district since he was first sworn into office on 3/12/2012 and is most noted for introducing House Bill 688, the Fair Taxation Act of 2014. This bill is the state version of the FairTax. Kirby worked with GFFT to create this bill. He plans to reintroduce this bill in the upcoming session of the legislature. (Click here to read the bill.)

Kirby recognizes that the current Georgia tax code is loaded with tax preferences, credits, and exemptions. Lawmakers are able to use the tax code to pick winners and losers, giving perks to some people and businesses while punishing others. And lawmakers are using your tax money to perpetuate this unfair treatment. Kirby knows that this activity must stop. So, he took a stand and introduced the Fair Taxation bill in the state house. Kirby is an adamant supporter of the FairTax, and thinks that Georgia should lead the way with its own FairTax legislation.

Georgia taxpayers need a person in office who speaks for them, not for special interests. Georgia needs to level the playing field for all people and businesses. Georgia needs to pass its own FairTax bill to stimulate the economy and create jobs, so that we can provide a better future for ourselves, our children, and our grandchildren.

Georgia needs leaders who have shown a commitment to making the FairTax a reality.

Learn more about Tom and his message by visiting his website at http://kirbyforgeorgia.com/ . He needs your support as he fights to get the FairTax passed in Georgia.

The 114th District is located in the Loganville area. There is a map of the district on Kirby’s website. You can also learn more by visiting the My Voter Page at the Georgia Secretary of State website at http://www.mvp.sos.ga.gov/ .