Your help is needed to make change happen.

Below are detailed responses to FairTax criticisms, but here is a short response to these attacks: A frequent critic of the FairTax, who’s employment has been centered around working with today’s complicated tax code, seems to have intense motivation to disparage the FairTax which is the best hope for transformational tax reform. Instead of ending the IRS’ reign of terror as the FairTax would, he wants to enable the IRS to enforce an unproven tax code of his own creation. Why someone would dedicate so much time to keeping the IRS in our lives only raises questions as to his motivations. 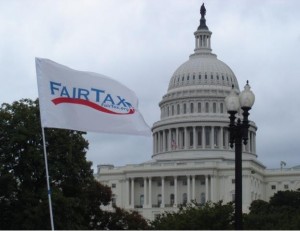 The FairTax enjoys by far the largest groundswell of national grassroots support of any tax reform plan of the last 15 years or currently before Congress. As with any proposal of this magnitude, there are a few critics who consistently relay flawed and outright wrong information while attempting to make their case. One frequent commentator proudly states that he is a retired CPA/tax lawyer specializing in the taxation of insurance companies. What this individual fails to also tell readers is the magnitude of spending the insurance industry allocates to lobbying Congress for preferential tax treatments.

For example, in the 112th Congress, the insurance industry alone spent in excess of $45 million on exclusive tax preferences. These exemptions are paid for by hard working citizens who can’t afford a stable of high-priced lobbyists to plead their case for taxpayer relief, because every time a special interest obtains a tax preference the rest of us have to make up the difference.

To date, we have been unable to determine if this individual has any other demonstrable credentials in public policy or economics. It is our experience that those who spend a majority of their professional career in service to special interests intentionally fail to acknowledge the positive impact of the FairTax, perceiving it to be in conflict with their personal self interest (as well as that of their co-workers and clients) as it eliminates the trade in tax favors.

The purpose of this document is to provide a thoughtful response for readers seeking rational, research-based information on which to evaluate the FairTax and its critics. We fully expect these critics will continue with their opposition campaign and support their right to do so under the first Amendment of the Constitution. We would, however, encourage all readers to use sound research vs. opinion and conjecture when evaluating which tax plan best serves the American people as a whole. In fact, we recommend this process when deliberating any matter of public policy.

It is our hope that this document provides the reader with a basic foundation of factual information from which to begin that process.

The purpose of this document is to address the critics’ most common misstatements/attacks regarding the FairTax so readers can make an informed decision on a subject as important to our nation’s future as is federal taxation.

One Critic’s Alternatives to the FairTax

One of the FairTax’s most vociferous and frequent critics claims that he recognizes that our current tax system badly needs reform, just not the FairTax. He has advocated two different alternatives at different points in time. The first proposal was being advocated in 2010 while the second one receives the majority of his energy today. It isn’t clear whether he has abandoned his first one or sees the second one as an interim step to get to it, so we will describe both of them here and point out the problems inherent in each one.

The national budget, after being reduced from 2013’s $3,454 billion to around $800 billion per year, would be divided by the national population to arrive at an annual tax bill of approximately $3K to $4K for every man, woman and child in America. This would mean that a six week old infant would have the same tax liability as Bill Gates. To put this $800B number in further perspective, in FY 2012 the federal government spent $682 billion2 on the military, and approximately $360 billion in interest on the national debt3. In other words, this proposed reduced budget would not even cover the military and our minimum required debt service at 2012 levels, even if we totally eliminated the Justice Department and the federal court system, both houses of Congress, the White House and all cabinet agencies, the State Department and all overseas embassies, the CIA, and every other department of the federal government.During a debate in 2010, the head tax author was asked if defaulting on the national debt was a component of his proposal and how the subsequent economic repercussions of that decision factored into his plan. He responded that default was not assumed in his plan; his head tax proposal would not be implemented until the national debt was paid off. At the time of this question, the national debt was somewhat above $14 trillion (as compared to somewhat over $17 trillion now). When asked how he thought that we could pay off $14+ trillion in accumulated debt when we could not even get a balanced budget amendment through Congress and continue with a tax system that hid the true cost of government from those who have to pay it, he responded with silence.

(We assigned this name to differentiate his proposal from the myriad of other flat tax proposals) – The author went to the internet and found a flat tax proposal which was specified in the form of a bill in Congress – HR 1040. HR 1040 is a flat tax bill which was originally championed by House Majority Leader Dick Armey and has been reintroduced into every subsequent session of Congress by his successor in TX CD #26, Rep. Michael Burgess, since Mr. Armey’s retirement. HR 1040 has never recorded more than about 10 co-sponsors (as opposed to the FairTax bill, HR 25, which has had more than 70 co-sponsors at various times), and it is not even supported by a majority of those who call themselves flat taxers. Because HR 1040 is not revenue neutral, it will never be taken seriously in Congress.Nevertheless, it was used as the starting point for still another flat tax proposal. Please understand that there is currently no shortage of flat tax proposals that have been floated by various groups. In addition to HR 1040, there are Hall-Rabushka, Governor Rick Perry’s, Heritage Foundation’s, Senator Richard Shelby’s (R/AL), and several other flat tax proposals out there. Dr. Arthur Laffer even aired a version on The Glenn Beck Show a couple of years ago which replaced payroll taxes. This is in spite of the fact that most flat taxers criticize the FairTax for replacing payroll taxes. All of these flat tax proposals are apparently lacking since new versions continually pop up like dandelions in a spring lawn. Flat taxers might be better served by spending their time and energy coalescing around a single flat tax proposal, rather than continuing to proliferate new versions. After all, if the minority who call themselves flat taxers cannot agree on a single proposal, how is the rest of the nation supposed to join them?HR 1040 includes the following features:(a)          It has a 17% single rate with a basic standard deduction plus additional standard deductions for dependents.(b)          It is an option, meaning that taxpayers can make a one-time non-reversible election to file under the flat calculation method. This means that it retains the current dysfunctional tax system, since some taxpayers will not elect the new option. It actually adds to the current 70,000 page mess that no one understands, rather than reducing it to a more manageable number.

The author of this “new and improved” flat tax proposal changed both of these features with a mere wave of his hand. The process of modifying HR 1040 to meet the author’s personal preferences must have taken all of 15 or 20 minutes, since HR 1040 is a one page document. It is fairly easy to develop a tax reform proposal when you aren’t constrained by congressional rules and you aren’t really serious about seeing your proposal enacted.

This Plan Z flat tax proposal has a 10% flat rate with no deductions. It does not replace Social Security or Medicare taxes, so the combined stated tax rate on wages would exceed 25% inclusive, somewhat higher than the FairTax.

Neither the head tax nor the Plan Z flat tax are documented as to their specifics, nor is there any written explanation of their benefits (that we know of). Neither of them have a grassroots organization mobilizing support for them; there is no website where an interested citizen can go to obtain more information, nor are there any economic studies. There is no bill in Congress for either of them, which also means, of course, that there are no co-sponsors. However, the author of these two unserious and deeply flawed proposals claims they are the result of “thorough professional analysis.”

Read more of our frequently asked questions in the FAQ section.
Read the FAQ's